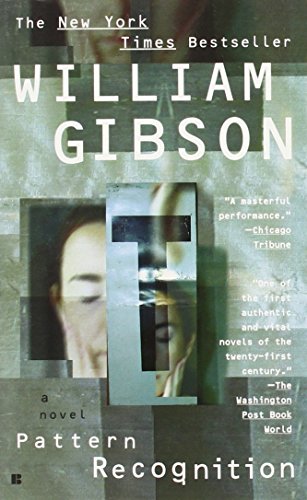 In Pattern Recognition, William Gibson changes focus from the not-too-distant future of his slick, influential SF novels to a netwise vision of strangeness just hours or minutes from the present.

Talented, vulnerable heroine Cayce Pollard is an adept "coolhunter" with an intuitive gift for telling whether any image or logo will be a commercial flop. The downside is her tortured sensitivity--like an allergic reaction--to logo overexposure. She can just about bear to fly BA, but not cross-promoted Virgin...

When she's consulted by top ad agency Blue Ant and gives the thumbs-down to their designer's latest concept, the edgy urban paranoia begins. A porn-site URL that she never accessed appears in her browser history, and the phone's redial button goes somewhere it shouldn't. The same faces appear around her as she flits between continents. Small world. Worryingly small.

As new vistas open in viral marketing and stealth publicity, the big admen are all too interested in Cayce's private hobby: mystery fragments of haunting movie footage, released anonymously on the Web. This unknown "garage Kubrick" auteur has spawned a fascinated, obsessive online cult. Is this a brilliant marketing operation for a still-unknown product, or something with different, dark and painful roots?

Cayce's personal quest, or flight, converges on the source of the Footage, helped and threatened by memorably offbeat characters. In Britain, these include a pettily sadistic woman who seems to know Cayce's most carefully concealed phobias, and an embittered collector of obsolete mechanical calculators made in Liechtenstein. Tokyo: a lovesick Japanese geek whose "otaku" friends find a hidden digital signature in the Footage. Moscow: a strange girl whose uncle is a fabulously wealthy--and dangerously protected--Russian mafioso...

Here's Cayce in a Japanese hotel, showing that wittily lyrical Gibson view of the world and his deft use of brand names:

She uses the remote as demonstrated, drapes drawing quietly aside to reveal a remarkably virtual-looking skyline, a floating jumble of electric Lego, studded with odd shapes you wouldn't see elsewhere, as if you'd need special Tokyo add-ons to build this at home.

This world of glittering surfaces and pulsating data connections is mined with surprises, betrayals, flurries of violence and unexpected allies. This is a very 21st century novel: compulsive reading, and vintage Gibson. --David Langford